In order to present a diverse, compelling programme, your announcers need to have access to a second computer in the on-air studio. 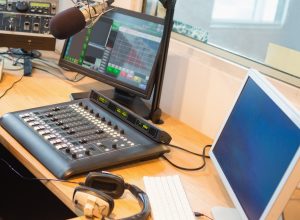 The only job of the main computer in your on-air studio is to run the radio station automation software. It is from here that songs, jingles, IDs, commercials and programmes are played. It’s a good idea to network it with at least the production computer, so audio files can be easily transferred. However, in my opinion, it should NOT be connected to the Internet. This is to protect it from viruses, and to make sure it is free to play audio without interruption. The on-air computer has its own channel on the audio mixer.

The second computer does everything the first one doesn’t. It IS connected to the Internet. It also has its own channel on the audio mixer – which is clearly labelled. That means it has the advantage of playing audio independent of the main computer – so you have two digital audio sources. Here are some of the possible functions of a second studio computer.

None of the above functions is highly taxing, so a fairly humble machine should be enough. Just make sure: