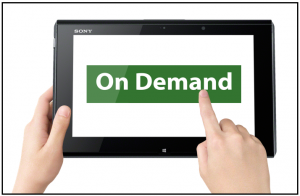 There was a time when media consumers (ie: the ordinary person at home) was fully at the mercy of radio and TV programmers. In fairness, the programmers did the best they could to cater to peoples’ needs. However, if you missed it, you missed it. In my country, one of the most popular programmes was called ‘I Like That One 2.” Viewers would write in (yes, write) and request segments of TV shows that they would like to see again.

Then, came the game changer – the video recorder. It allowed viewers to automatically record their favourite TV shows, and watch them at a time that suited them. The internet has taken that several steps further, to the extent that now, many people only watch video on demand. And with the breathtaking scope of media now available (through services like Netflix and You Tube), media consumers have gotten used to being their own media programmer.

So, you are a radio station (terrestrial or on-line, or both) and you are still in ‘linear’ mode – which means you play your content according to a schedule. What can you do to cater to the needs of this On-demand generation?

Hopefully, you will have your own radio station web site, or better still radio station app. Get your web designer to include an on-demand section in your web site or app. Make it easy to see and easy to access. So, what do you include in on-demand?

These days, people don’t have the time to click their way through your on-demand content, to find something they want to stop and listen to. All on-demand content needs to be in clear categories (usually programme or feature name), and must include a short written description of the content of each recording.

Recorded programmes will usually come to you fully produced and fully packaged. Live content that you record from your own station, may need to be packaged. This includes editing, audio processing, and some kind of recorded intro and outro.

What about songs on demand? If you have posted music on your web site, you may get a polite ‘cease or desist’ letter from the record company! That is what Apple Music and Spotify pay the big bucks for! However, if you are actively promoting new talent, you may be able to feature some of these artists in a special on-demand section on your site (with their permission of course). Another idea is to list your station’s top ten on the web site, with a click through link on each song to take people to an online store where they can hear a sample and buy the song.

And finally, once you set up an on-demand section on your web site or station app, it’s really important that you promote it…heavily! At the end of every recorded programme, play a short announcement that listeners can hear this programme again on-demand, on the site or app.

Every train has a caboose…and here is mine: What other ideas do you have? Let’s start a conversation.