I have visited radio stations that are a single room operation. On one side of the room is the computer, mixer and microphone; on the other is the transmitter! Of course, this is perfectly functional, and is enough to keep the station on air. 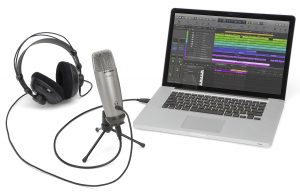 However, when a station wants to start producing their own Station IDs or start making recordings to play on air later, then the basic set up becomes extremely limiting. Sure, with modern mixers and computers with multiple sound cards, it is possible to play an automated programme while using the same equipment to record something else at the same time. The only thing I can say about that (Jenny) is that can ultimately only lead to mistakes and interference with the on-air programme.

For best results, recording requires a separate room. However, the costs may not be as bad as you think!

If you have a small room available, by all means use that. However, just as long as no-one else is in the room at the time, any room can be used. Even an office room will work.

A small production studio is all that is needed to produce Station IDs, commercials, programmes, even for voice tracking.

I would suggest a very simple set up, with desk top or lap top computer (or even an iPad or tablet). It doesn’t even have to be the latest model! Audacity recording software is free, and will do almost anything you ask it to!

I will also suggest a mixer-less studio! Modern USB microphones plug directly into the USB socket of your computer, and do not require a mixer. The recording volume is controlled in your computer. Companies like Shure, Rode and Samson produce great sounding USB mics, and some models are very cost competitive (much cheaper than an analogue microphone and mixer configuration).

For monitoring, headphones will do, although if you have a pair of computer speakers, they are more healthy for your ears during editing. In fact, some USB microphones come with sockets to plug your headphones into. And don’t forget a microphone stand, preferably one with some kind of boom so you can bring the microphone close.

The only limit to keep in mind is that USB cables have a useful limit of around 3 metres. But that is enough for most applications. Enough to run the cable into a walk-in wardrobe to use as a microphone booth! (clothes make wonderful sound dampeners!)

There is the issue of moving your completed audio to your on-air computer for playback. The ideal would be for the two machines to be networked. Otherwise, there is the steam method (USB thumb drive).

Whatever space you choose to record in can produce unwanted echo, so place as many soft materials as you can near the microphone – floor covering, curtains, soft wall hanging, soft material on desk top.

So, a low cost production studio. Essentially a lap top and a USB microphone. You may have these components already.

Once you start producing your own station audio, you will wonder how you managed without it!