As I mentioned in this blog topic last Thursday, playing songs more often is a means of introducing new songs and making them known. As we all know, it is the favourites of today that become the memories of tomorrow. 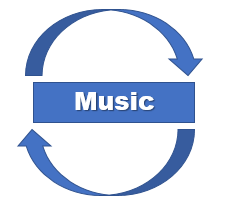 Repetition of songs in radio is no accident. It is clearly and deliberately planned.

Many radio stations operate a high rotate playlist for new songs. (In reality, many stations are very scientific, and operate high, medium and recurrent playlists as well).

Normal practice is to operate the high rotate playlist on a first-on, first-off basis. However, if a song is proving popular with the listeners, then it would be wise to leave it there for a couple of extra weeks. If you think people are starting to get sick of a particular song, go ahead and replace it at the next changeover. (By the way: how do we know people are getting sick of a particular song? With Internet radio, these statistics are freely available – ask your broadcast provider).

Operating a high rotate playlist is more work, but it is the most effective way to make new songs familiar – absolutely essential for hit music stations.

To find out more about radio music management, check out this series of videos: https://onlineradiotraining.com/…/videos/managing-music-fo…/

Thanks for being with us for this series of ideas and tips.

Hit reply and join the conversation.