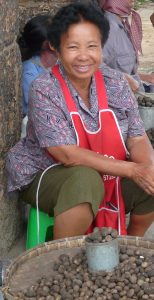 Think about your characters’ real lives, and put words in their mouths that they might actually say.

Dara: (impatient) Namfon, what’s holding you up?  Come on! You’ll be late for school, and I’ll be late to the market.  You know most of my customers come first thing in the morning!”

It’s all about the storyline, right? The characters don’t matter so much.

Hmm…actually, they do.  A story can’t exist unless you have characters to carry the plot (storyline).  And, if your characters are not well-developed, the story won’t sound convincing.

Characters have to be entertaining, but also suitable for the role they’re playing in the story, and the purpose you have a story in the first place.  Here are some tips for developing the personalities of characters in your stories:

There’s a lot more to characterisation in radio storytelling, but these few points should get you started in the right direction.  If you’d like to learn more about this topic, I recommend Esta de Fossard’s “How to Write a Radio Serial Drama for Social Development: A Script Writer’s Manual,” published by Johns Hopkins Center for Communication Programs (1996).