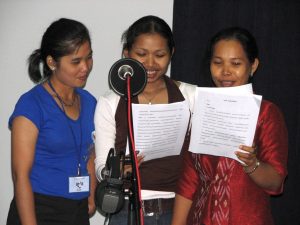 Recording a radio drama in Cambodia.

I’ve frequently used short stories to introduce or illustrate a point in my educational programs.  Stories are great for that purpose: they can get the listener emotionally involved in the storyline, and listening passionately to hear how the story turns out—will the hero win the battle?  Or will evil conquer?

Stories can also be good as teaching tools in themselves.  I’ve heard serial dramas—set in a small farming town—that have been used to teach basic health lessons.  Great idea!

Whether you use multiple voices to produce a dramatized story, or a single voice to narrate a story, here are a few tips for telling good stories:

Have a clear structure.  Another word for this is ‘plot,’ or storyline.  It’s the main direction your story goes, from beginning to end.  The plot should include these major components:

A short story I wrote for an educational programme had all these features:

So…this is the path a story can take.  But what about other things, like characterisation, use of dialogue and sound effects?

Aah, well: that’s a story for another time! J