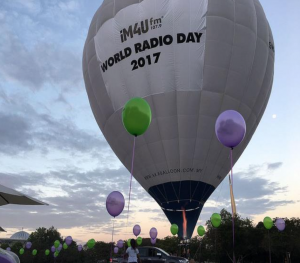 Have you ever seen a hot-air balloon?  In my home town in New Zealand there’s a big festival every Easter.  Balloons are in strange shapes: a cow, Cinderella’s carriage, and more.  But one thing I’ve never seen in a hot air balloon is…a radio station!

That was the whacky and creative idea of a radio station in Kuala Lumpur, Malaysia, that targets children between the ages of 10-18 as their main listening audience.  A lot of media commentators say that kids this age don’t listen to radio, but Kartini Ariffin (station manager) and her team at iM4Ufm (http://im4ufm.my/) believe that’s just not true.  Sure, most young people start out by listening to the stations their parents have chosen; but if the radio is directed at them…the sky’s the limit.  Literally, as it happens…in a hot-air balloon!

The balloon stunt was undertaken in commemoration of World Radio Day, back in February.  I only heard about it when I listened to Kartini’s report at RadioAsia2017 last month; it was really one of the highlights (pun intended!).

In addition to creative events that promote radio, the station does a lot to reach out to their target audience: school-aged children.  They have events in schools and on campus (called “school invasion”). Groups of kids come into the station and learn what it’s like to be a radio presenter.  There’re concerts with good, clean music at times (and venues) that youngsters are able to attend (i.e., not late at night)—and they live-stream the concerts, so parents can screen them and maybe let their younger child attend the next one, confident that it’s family-friendly.

Kartini’s report gave us lots of information—from statistics (99% of people in Malaysia aged 10 and above spent at least 15 hours a week listening to radio) to stories (about a station-hosted fun run for health).  She explained that the station must have a clear strategy to reach out to their target listeners in ways the audience will enjoy—an important consideration, since this audience has an initial attention span of about 8 seconds!

I asked myself how a radio station could be sustainable by targeting people in this age-group?  They don’t have much money, so how can advertisers get income by promoting their products on air?  Kartini explained how this works.  Young people don’t have their own money, but often they control a lot of the spending in the home: their parents might buy them a smartphone, or take the family on holiday to a location chosen by the child(ren). They’re smart and sophisticated consumers, and they shop differently from other generations. So the advertising at iM4U is targeted, promoting products that young people like, and that their parents are willing to buy.

Why target kids?  Because they’re an under-represented population group in radio, because they’re full of passion, energy and creativity.  And because they’re the leaders of the future—so fun-filled, value-based programming for kids is a great investment!