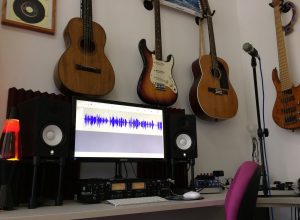 Today my friend was recording some travel tips in a home-studio.  Sprinkled about the walls were guitars—some acoustic, some electric.  Nice look!  But, as the recording started, there was this weird bass resonance that crept into the recording when my friend’s voice passed a certain pitch.  Took awhile to figure out what it was.  Can you guess?  The acoustic guitars were taking the sound of her voice and amplifying it, then sending it on back to her!  The result on the recording was a strange reverb in certain parts of the track.

In the end, she removed all the acoustic guitars from the studio and placed them in another room; much better result!  But that was a good reminder that it’s important to listen for noises in the environment that can reduce the quality of a recording.  In fact, a bit later in the day, my friend was listening through to some of the voice-tracks and heard a passing motor-cycle in the background…we did a re-take.  Maybe the radio audience wouldn’t notice…or maybe they would.  It pays to be picky, and your end result will be that much better.

If you’re recording at somebody’s house, remember small things like the bird in its cage—currently silent, but sure to start chirping the moment you get to the good part of an interview!  Or that faucet in the room next door…based on Murphy’s Law, it’s sure to drip loudly into the sink just as you say something.  And, inevitably, the sound will be loud enough to be obvious, but stuck behind a word so you can’t cut it out later!

Another thing to remember, when you’re removing ambient noise, is to plug your electrical appliances back in once you’re finished.  If you unplugged the refrigerator to stop the motor messing up your interview—remember to turn it on again when you’re done!

And, as for the guitars: the acoustics had to go…but we kept the electric guitars right there on the wall.  They have no echo chamber, and the curved shape of their bodies was great for breaking up sound-waves against the flat, hard wall in the room.