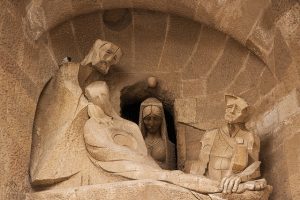 Is Easter celebrated in your country?  If so, how?  In some countries (like New Zealand) the stores are full of chocolate eggs, and the whole event is an excuse to eat more junk-food.  In others, the Easter Bunny hides coloured eggs in the garden and children have a wonderful time finding them.  And by the way, did you know that the story of the Easter Bunny originated in Germany?

What’s the point of all this fable surrounding Easter?  And come to that, what’s the point of Easter?  Historically, the event commemorates the death and burial of Jesus in ancient Palestine…and his subsequent resurrection from the dead as the Saviour of humankind.  The Easter eggs that many children chase after were originally intended as a symbol of new life (i.e., new life by trusting in Jesus), but now they’ve become, in the countries where chocolate eggs abound, more a symbol of heart disease!

Since Easter is approaching (Good Friday falls on April 14th), how can you use the ideas and themes of this season for programme content at your radio station?  If you’re at a Christian station, it’s simple…but don’t overdo things.  Listeners don’t appreciate being bombarded with slogans and emotionally-charged challenges to faith.

For any other broadcast genre, Easter is still a good time to produce promos that help listeners get a clearer perspective about your station’s values and ethos.

A promo, by definition, is something designed to extend the listening of the station’s audience, or to attract new listeners (Eric Norberg, Radio Programming: Tactics and Strategy, 1996:95). Essentially a promo is a short recorded (or live) item that you can re-use many times through the broadcast day, to communicate a single message. It’s longer than a station ID but shorter than a programme.  You can do a promo for your programme—either one that’s coming up, or one that has just finished (include a fun sound-byte to entice listeners).

And you can also do promos for Easter.  Think about it.  Talk about it.  Promote any special Easter programmes the station has planned.  Reflect on the values that Easter represents—especially those that fit in with your own station’s values and identity.  What about something like this:

“What is Easter all about? It’s about love…true love. <say this bit in the Princess Bride voice if you like that movie!> Not the romantic kind, but the kind that’s willing to sacrifice for the sake of the person who is loved.  Will you give up Facebook for the evening to sit and actually talk with your partner?  Will you abandon that extra bit of paperwork to play a board-game with a child?  Those are infinitely small sacrifices compared to the greatest one that occurred that first Easter Friday…but they’re still sacrifices.  As one ancient philosopher says, ‘Love bears all things.’  <pause> Star FM.”