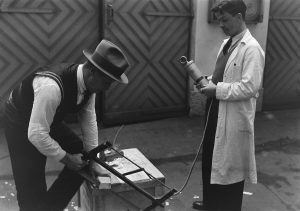 Have you ever had to use sound effects (SFX) in your show? Perhaps if you run competitions, you’ve had fun FX as ‘hot keys’ to respond to callers when they get the answer right (cheering crowd) or wrong (toilet flush).

But, used sparingly, sound effects can also be…well…effective…when they’re added to a piece of narrative.

I used to write scripts for educational programmes using a method called Interactive Radio Instruction (blogs.worldbank.org/edutech/iri). To get the listener’s attention and have her/him connect emotionally with the topic, sometimes I’d write a short story/drama. I didn’t usually have enough voice-talents to produce a real drama, so most often it was a monologue. But how to make that interesting? Voice-acting, sure…plus the selective use of FX.

When you’re adding sound effects in a story, it’s important not to over-use them. Read thru the script and find places where the listener’s imagination can fill in the gaps…if it’s prompted with a timely sound effect. My story about a Filipino boy running through a graveyard at night to get a doctor for his mother was accompanied by a squeaky gate, a howl, and a heartbeat. Nothing else.

The story of a man in prison led into more details about the traffickers that sold him—but it started with his complaint to the prison guard that he was innocent—“Innocent, I tell you! I’ve done nothing wrong!” The guard reacts predictably (“they all say that”) then welcomes the poor prisoner to “the start of your new life!” Long grating sound as the door closes, followed by an echoing clang…and a fading groan from the prisoner.

Don’t overuse SFX…but do use them. They can be a great way to stimulate the listener’s imagination, making use of one of the profound strengths of radio as it feeds the ‘theatre of the mind.’